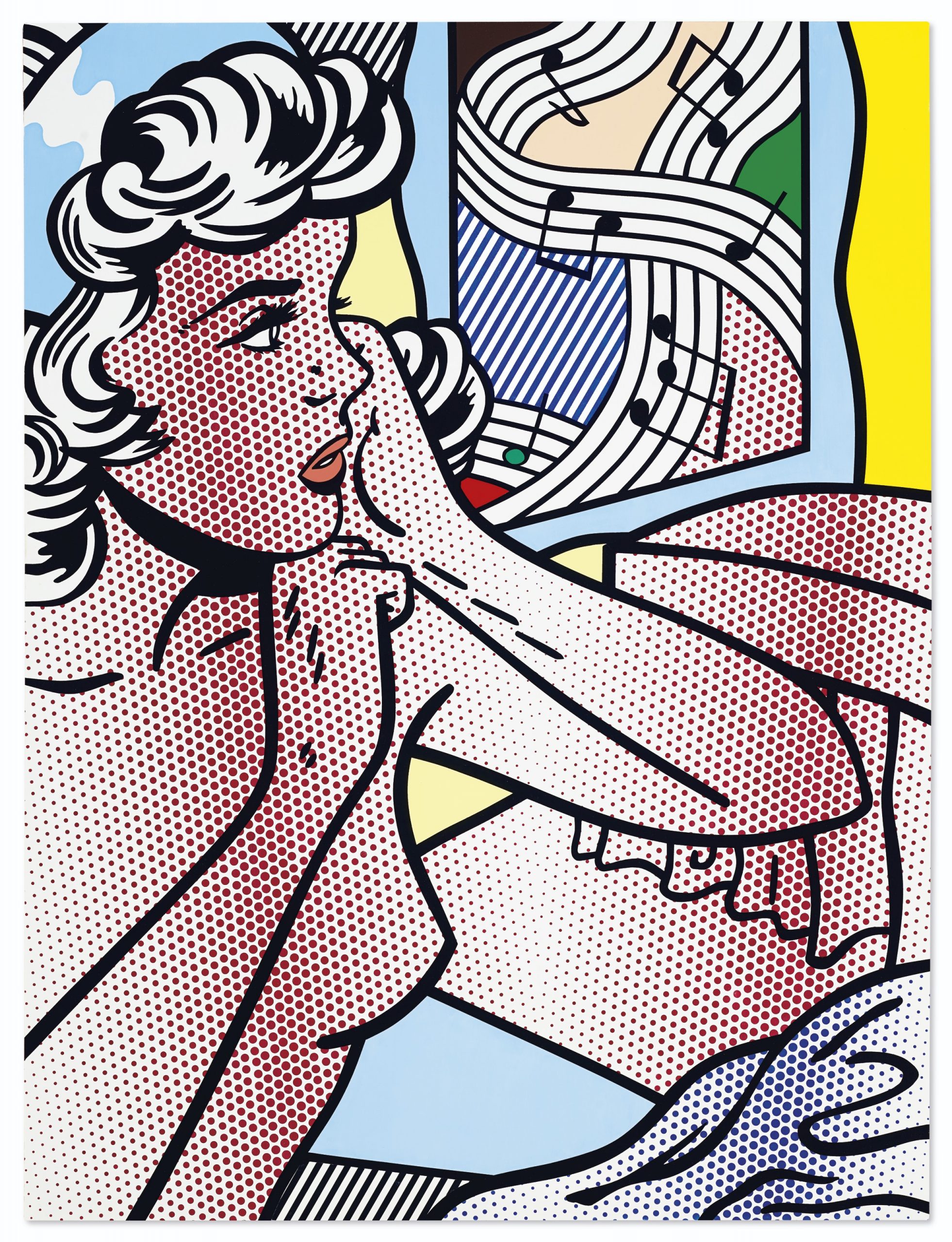 Since our last newsletter, we have looked at online sales at auction and alternatives to them (the private market is such an obvious boon); also planning matters given the proposed changes to taxation and the heritage regime. 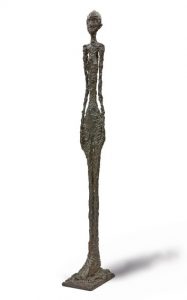 However, there are other formats. The international houses were stung by the 300 prime-work Marron Collection going to a consortium of dealers including: Gagosian, Pace and Acquavella that began selling it privately without engaging with the risks of auction.

Perhaps this led to the unusual: In Confidence sale, at Sotheby’s Hong Kong in May in which private and auction formats were mixed online.  There were no sale guarantees and there was no public bidding (that’s right – an auction without bidding): instead, buyers deposited sealed bids, not knowing how high they had to go.  The results have been kept private and we were surprised by another In Confidence sale this time for the monumental Alberto Giacometti, GRANDE FEMME I (1960), which took place in October in New York.

We can only assume the owner was not prepared to pay the vast fees for a guarantee and did not have access to the private market although was clearly worried about public failure or selling low.

We must not forget the regional and local houses, which report really brisk and healthy trading conditions: we suspect their buyers are making decorative purchases. Once one moves to collecting the rules of engagement change, and international issues start to emerge. Unlike the London/New York houses, which are losing staff, we note that the regional houses are signing up some big names. 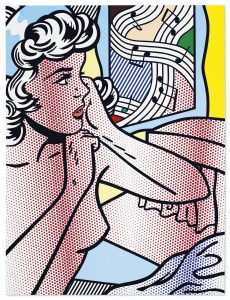 The international houses want to talk about the blockbuster July sales – the rest of the summer sales were less impressive: one sale scrambled to find lots and took dealer stock to fill the catalogue. Christies had, One: A Global Sale Of The 20th Century, a live relayed online sale between Hong Kong, Paris, London and New York combining the best of the best from the 20th Century – Impressionist Modern and Post War & Contemporary categories were merged and bidding was back.

I’m sure Christies will sort out the technical problems that led to a massive fifty-minute delay before the sale but taking bids online and by telephone from all over the world is going to be difficult.  With very attractive estimates and large numbers of guarantees, 94% of lots were sold by number and 97% by value. The Roy Lichtenstein, NUDE WITH JOYOUS PAINTING (1994) was the highest selling lot for Christies ($46,242,500) and with a small number of artists record brought its sale stats up. 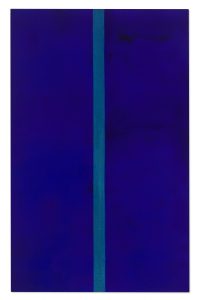 Around half the sale carried guarantees to protect owners against public failure, eight were agreed in the last days before the sale – financial gymnastics were at the fore and we suggest at the expense of targeted marketing. Interestingly, this New York lot was not guaranteed and struggled to get bids. With only a few weeks to market the sale and the financial gymnastics, Barnett Newman, ONEMENT V (1952) that should have done well sold under the low estimate ($30,920,000) once you take out the buyers’ premium.

Sotheby’s also had a blue-chip 20th Century sale of 74 lots but without a Paris offering. $84.5 million for this Francis Bacon, TRIPTYCH INSPIRED BY THE ORESTEIA OF AESCHYLUS (1981) is as far as we know the highest amount paid online for a work of art, making Sotheby’s over $10 million in buyers’ premium, for a work that had not been seen by the buyer but was immediately recognisable.

At least these sales allowed these auction houses to survive. 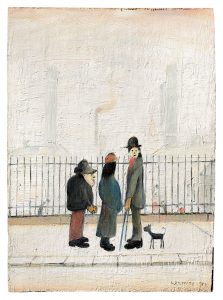 What else is there at the major houses? Sadly, it looks like an eBay style sale. It looks like the aggregate sale value for a timed online sale is $10,000,000 and under and this means many good works could end up here with effectively no prior marketing and the same buyer’s and seller’s commissions as the live online sale.

I watched the timed online: People Watching: The Art of LS Lowry sale, at Christies in July, which had works with estimates as high as £500,000 – 800,000 to see how it would perform. Although one painting did well, I watched many lots failing to sell and estimates being lowered on screen as no bids came in. Lawrence Stephen Lowry, LANDSCAPE WITH FIGURES (1957) shown here sold for £200,000 hammer against a low estimate of £250,000. 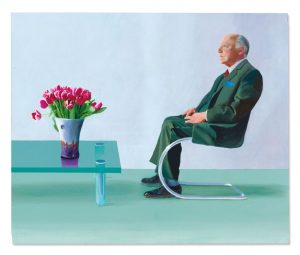 We wondered, in July, whether the July blockbuster sales were sustainable as there are only so many works that conform to such a narrow criteria and belong to owners that really need to sell. The October sales were less impressive, felt flatter and guarantees were still a necessary part of the mechanics of consigning even in London. For instance: David Hockney, PORTRAIT OF SIR DAVID WEBSTER (1971), sold at Christies at the low estimate of £11,000,000 making Sotheby’s £1.8 million in buyer’s premium to. The third party guarantor will have been paid handsomely although we understand the portrait actually sold to the current Chairman of the Royal Opera House. Sadly the struggling Royal Opera House had to sell the portrait of their ex Chairman to help ends meet.

Online Sales – what do we make of them?

Suitability & Sustainability – some categories are well disposed to the online format – prints, wine, jewellery, watches, which could all be described as multiples. However, before Covid 19 online sales tended to be for the lesser lots. At the top end of the art market; well known, exceptional, easy to understand, perfect works that need to be sold will get rarer and rarer.

Trends & Risks – Covid 19 has magnified the risks of auction and accelerated many of the trends within the international houses, such as merging categories and losing width.

Marketing periods – the live online sale has a much reduced marketing period as compared to traditional sales. Timed online is down to two weeks. Marketing to potential buyers is essential as competitive bidding sets the price at auction.

O, o, ∆, etc (Financial Arrangements at auction etc) – there are a whole host of symbols that I can’t find on my keyboard describing various guarantees, auction house interests etc. There is a worrying and growing feeling of a ‘club for the initiated’ (the houses really have a group of guarantors they habitually turn to) that are buying and selling to each other through auction, leaving everyone else in a state of confusion.

Viewing Numbers up – but why are so many lots selling low from even lower estimates?

Commissions – they have not been reduced with the move to online. The houses cite the new viewer numbers to justify them but isn’t most of the information simply online?

Viewing – once Covid 19 has left us alone, we suggest that viewing is an essential part of buying complicated visual objects and this needs to be addressed. The main houses still have wonderful flagship buildings.

Psychology and Theatre of bidding – it’s so much harder for a buyer to go the extra mile in silence and without a public demonstration of interest from other buyers.

Lean on me – buyers have to rely and trust the auction house that much more through the online format, but they ought to remember the houses act for sellers too.

Wholesale/Retail – dealers used to buy at auction as a wholesale process and sell at retail levels.  With so little viewing by retail buyers, will we see a return to this and particularly for timed online sales.  Sellers won’t be well served by this.

Given the low interest rates at the moment, owners might consider borrowing against their art, if they need liquidity, with the plan of offering when the world and art market might be in a better place. Good works can be borrowed against relatively easily and quickly. Provided the loan is independent of the auction houses, the owner’s freedom can be preserved for a future sale.

The decision to sell the portrait of SIR DAVID WEBSTER… was, apparently, a difficult one but it went through unlike the works by Brice Marden, Clyfford Still and Andy Warhol, expected to fetch $65 million, but which the Baltimore Museum of Arts, decided at the last minute not to de-accession (sell). De-accessioning has become a very hot issue.

Privately run museums and others that need liquidity might think about the private market with so much risk in the auction market. Is a very expensive guarantee and selling low the answer? An institution/owner might do well to have a second opinion from an independent voice given the legal and commercial issues at stake.

Auction is not the art market – 50% is traded privately. The private market has the capacity to outperform auction and very often contains a significant premium over it and does so without the risks of auction, selling low or failing to sell, which are so magnified at the moment. With a private sale one starts at the highest level not the lowest, as with auction, and the process can be controlled.

As everything is bespoke, even now, viewing can very often be achieved. The UK export licence department has stayed open during the second lockdown, which means the international market is available to those in the UK.

The private market is available for a wide range of art. We recently sold a Lowry painting privately – sorry, we can’t show an image. If we had included it in the Christies Lowry sale in July it might well have had an estimate of £250,000 – 350,000 and might well have failed to sell as it had many complicating issues. In fact, we sold it privately for a little over £400,000. Although this is a relatively modest work for us, it shows how many works can be sold in the private market.

Planning – A look at the UK

With reviews of and proposals for the Inheritance Tax and Capital Gains Tax regimes owners might use a depressed public market to give chattels to the next generation sooner rather than later.

The heritage regime seems to be working well and we haven’t noticed values being affected by Covid 19. Remember, Acceptance in Lieu of IHT and Cultural Gift Schemes are on a first-come-first-served basis with an annual cap. These work well when the private market is factored into the agreed value.

The auction market is clearly even more complicated and risk filled than usual and we consider there are so many owners that are not being well served by the online platform and the financial interests that run through the upper end of the auction market. However, auction can be very successful and is vital where there isn’t an obvious private market: it’s a matter of choosing when to use different markets and why.  This is one of the most important services an agent can perform and is vital.

It is tempting to speculate that Christies and Sotheby’s want to become Phillips and only handle 20th Century works. We hope this isn’t the case and that there will be a place for pre-Covid 19 auction sales in which full viewing and a really strong marketing programme can be put in place and that expertise remains for a wide range of objects for the benefit of both buyers and sellers.

Why are so many sellers using auction at the moment and in particular guarantees when the private market is available? The private market should be explored at least at first instance. Depending on the circumstances, an owner might borrow now and sell when the pandemic has gone. An owner might consider planning options now and not wait for the New Year with the return of full value.

Without wanting to invoke the immortal words of Mandy Rice Davies, we are always stressing the need for independent advice. The need is even greater now. My contact details are included.